Data from children with ASD who are learning Indo-European languages indicate that (a) they vary hugely in their expressive language skills and (b) their pragmatic/socially-based language is more impaired than their structural language. We investigate whether similar patterns of language development exist for Mandarin-exposed children with ASD. Parent report data of the Putonghua Communicative Development Inventory—Toddler Form were collected from 160 17–83-month-old children with ASD. These children with ASD demonstrated similar levels of variability as Western children with ASD. In particular, they could be divided into three distinct subgroups (high verbal, middle verbal, low verbal), all of which manifested relative strengths in lexical and grammatical language compared to pragmatic usage of decontextualized language. 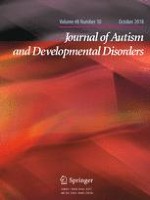 Circumscribed Interests and Attention in Autism: The Role of Biological Sex