With a sample of 4- and 8-year-olds (N = 131), we tested the extent to which more frequent experiences of victimization were associated with heightened aggression towards others, and how sympathetic concern and resting respiratory sinus arrhythmia (RSA) factored into this relationship. Caregivers reported their children’s aggression and sympathy. Children reported their victimization and their resting RSA was calculated from electrocardiogram data in response to a nondescript video. Findings revealed that children who reported more frequent victimization were rated as less sympathetic and, in turn, more aggressive. However, resting RSA moderated this path, such that children with high levels were rated as more versus less sympathetic when they reported less versus more victimization, respectively. Results suggest that considering children’s sympathetic tendencies and physiology is important to gain a nuanced understanding of their victimization-related aggression. 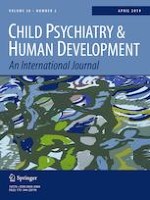 Should We Subtype ADHD According to the Context in Which Symptoms Occur? Criterion Validity of Recognising Context-Based ADHD Presentations

Measurement Based Care in Child Welfare-Involved Children and Youth: Reliability and Validity of the PSC-17