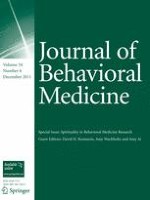 Role of religious involvement and spirituality in functioning among African Americans with cancer: testing a mediational model

Religious motivation and cardiovascular reactivity among middle aged adults: is being pro-religious really that good for you?

Beyond descriptive research: advancing the study of spirituality and health

Does social support mediate the moderating effect of intrinsic religiosity on the relationship between physical health and depressive symptoms among Jews?