The present study investigated differences in the behavioral and psychophysiological responses to provocation and in the level of callous-unemotional traits in boys exhibiting different patterns of aggression. Eighty-five boys (ages 13–18) in a juvenile detention center played a competitive computer task against a hypothetical peer who provided low and high levels of provocation. Youth high on both self-reported reactive and proactive aggression showed different behavioral responses to provocation than youth high on only reactive aggression. Specifically, the combined group showed high levels of aggressive responses without any provocation, whereas the group high on reactive aggression showed an increase in aggressive responding to low provocation. Further, results revealed a trend for the combined group to show lower levels of skin conductance reactivity to low provocation if they were also high on callous-unemotional traits. 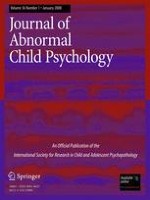 In the Face of Uncertainty: A Twin Study of Ambiguous Information, Anxiety and Depression in Children

Alcohol Use in Adolescent Twins and Affiliation with Substance Using Peers