This multiple baseline study evaluated the efficacy of behavioral parent training (BPT) for 12 parents (M age = 39.17 years; 91 % mothers) and their children (ages 6–12; 83 % boys) both with Attention-Deficit/Hyperactivity Disorder (ADHD), and also explored the acute effect of stimulant medication for parents before and after BPT. Parents rated their own and their children’s symptoms and impairment and were stabilized on optimally dosed medication. Then, parents discontinued medication and were randomly assigned to a 3, 4, or 5 week baseline (BL), during which they provided twice-weekly ratings of their impairment, parenting, and their child’s behavior. Following BL, parents and their children completed two laboratory tasks, once on their optimally dosed medication and once on a placebo to assess observable effects of medication on parent–child behavior, and they completed additional assessments of family functioning. Parents then completed eight BPT sessions, during which they were unmedicated. Twice-weekly ratings of parent and child behavior were collected during BPT and additional ratings were collected upon completing BPT. Two more parent–child tasks with and without parent medication were conducted upon BPT completion to assess the observable effects of BPT and BPT plus medication. Ten (83.33 %) parents completed the trial. Improvements in parent and child behavior were observed, and parents reported improved child behavior with BPT. Few benefits of BPT emerged through parent reports of parent functioning, with the exception of inconsistent discipline, and no medication or interaction effects emerged. These results, although preliminary, suggest that some parents with ADHD benefit from BPT. While pharmacological treatment is the most common intervention for adults with ADHD, further examination of psychosocial treatments for adults is needed.
vorige artikel Direct and Indirect Effects of the Family Check-Up on Self-Regulation from Toddlerhood to Early School-Age
volgende artikel Bidirectional Associations Between Parenting Behavior and Child Callous-Unemotional Traits: Does Parental Depression Moderate this Link? 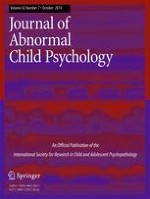 Erratum to: Equanimity to Excess: Inhibiting the Expression of Negative Emotion is Associated with Depression Symptoms in Girls

Children’s Responses to Hypothetical Provocation by Peers: Coordination of Assertive and Aggressive Strategies