» Toegang tot de volledige tekst krijgen
Objective. To evaluate the safety and effect of transcatheter device closure in ostium secundum atrial septal defects (ASD II) in patients aged 40 years and older.
Methods. Retrospective single-centre study concerning 47 consecutive ASD transcatheter occlusion procedures performed between January 1999 and December 2008. Electrocardiography, echocardiography and clinical assessments of the patients were conducted pre- and post-intervention and at follow-up.
Results. Of the 130 patients who were referred for interventional ASD closure, 47 were 40 years and older and all of them actually had the device inserted. There were no major complications during the intervention. Mean follow-up time was 15±15 months. During follow-up, three patients needed surgical reintervention because of device embolisation (n=2) or dislocation (n=1). Of the patients with severe right ventricular (RV) dilatation, more than half (58%) had no or mild dilatation at last follow-up. Reduction of RV dilatation was not related to age. Pulmonary hypertension was present in 63% before the procedure and was reduced to 38% at follow-up. NYHA class improved in all age groups, also in patients over 60 years of age. In two of the three patients who died during follow-up, no cause of death could be established, but both had responded well to treatment regarding the echocardiographic and clinical findings.
Conclusion. Transcatheter device closure of ASD is a successful and effective treatment, also for patients aged 40 years and older. Patients showed regression of right ventricular enlargement and an improvement in functional class. (Neth Heart J 2010;18:537–42.) 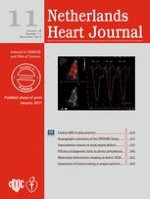 A retrocardiac mass unveiled by a can of soda

Not too old to be closed…

New guidelines for the management of atrial fibrillation: what’s new?