The online version of this article (https://​doi.​org/​10.​1007/​s10964-019-01147-3) contains supplementary material, which is available to authorized users.
Publisher’s note Springer Nature remains neutral with regard to jurisdictional claims in published maps and institutional affiliations.

Despite growing evidence that racial-ethnic discrimination has a critical impact on college students of color, there is a shortage of longitudinal studies investigating such discrimination across the course of students’ college careers. The present study examined trajectories of professor- and peer-perpetrated ethnic-racial discrimination across the first three years in college and the correlations between these trajectories and academic, psychological, and physical adjustment outcomes during students’ fourth year in a sample of 770 Black, 835 Asian American, and 742 Latino college students (total n = 2347; 60.1% female) at elite colleges and universities in the United States. Latent growth modeling revealed stability in reported peer discrimination over the first three years of college and an increase in reported discrimination from professors. Discrimination from peers and professors equally predicted unfavorable grades, a lower likelihood of on-time graduation, and less school satisfaction. Perceived discrimination from peers (but not from professors) during students’ first year predicted higher rates of depressive symptoms and more health problems in their fourth year. Although initial levels and trajectories of discrimination varied as a function of students’ ethnicity-race, the correlates between discrimination and adjustment outcomes did not vary between ethnic-racial groups. The present findings suggest that ethnic-racial discrimination is a complex, ecologically-based stressor that presents a constellation of challenges for students of color attending elite colleges and universities. 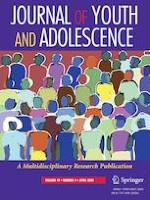 Supportive Community Resources Are Associated with Lower Risk of Substance Use among Lesbian, Gay, Bisexual, and Questioning Adolescents in Minnesota

Adolescents’ Identity Formation: Linking the Narrative and the Dual-Cycle Approach