Research is inconclusive about the trajectory of dating violence during adolescence and whether there are differences across gender and race/ethnicity. We examined dating victimization and perpetration trajectories among a diverse sample of rural youth (N = 580, 52.7% female, 49% Black, 39% White, 11% Hispanic or other minorities) in middle and high school who were surveyed annually across four years and explored the influences of gender and ethnicity. The results based on cohort-sequential latent growth modeling revealed that for boys, victimization peaked at 11th grade, and then declined. For girls, victimization was stable throughout adolescence. Perpetration was reported less frequently and increased steadily for males and females. For White youth, victimization peaked at grades 9 and 10, followed by a decline. For Black youth, victimization followed a linear increase. Perpetration trajectory followed a linear increase for White and Black but not Hispanic youth. The findings indicate that the developmental progression of dating violence during adolescence varies by demographics. The discussion focuses on future directions for research on teen dating violence among rural youth and implications for prevention and interventions initiatives.
vorige artikel Understanding the Buffering Effects of Protective Factors on the Relationship between Adverse Childhood Experiences and Teen Dating Violence Perpetration
volgende artikel Comparisons of Types of Exposure to Violence Within and Across Contexts in Predicting the Perpetration of Dating Aggression 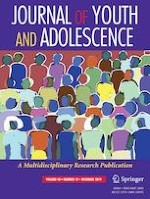