According to the information processing theory, financial strain may occupy cognitive resources and impede cognitive functions. On the other hand, a framework of stress and coping suggests that certain personal characteristics may moderate the negative impact of stress. The goal of the present study was to examine whether trait mindfulness moderated the longitudinal association of family financial strain with perceived cognitive difficulties, including perceived difficulties in attention, executive functions, and memory.

At two time points separated by about 12 months, 418 college students (35% were male; mean age = 19.93 years at Time 1) from a university in Hong Kong, China, provided questionnaire data. To test trait mindfulness as a moderator, hierarchical regressions and follow-up simple slope analyses were performed.

Theoretically, our findings highlighted the roles of both family financial strain and trait mindfulness in understanding changes in perceived cognitive difficulties in young adulthood. Practically, our findings pointed to the potential utility of targeting individuals’ mindfulness to protect them from the negative impact of family financial strain. 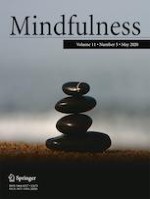 Nine Prolific Years: An Analysis of Publications in Mindfulness