Buddhist and scientific theories have described equanimity as a general outcome of mindfulness practices. Equanimity is a calm and balanced state of mind regardless of the valence of situations or objects and is a decoupling between the evaluation of this valence and the resulting common automatic approach or avoidance reactions. The relation between the practice of mindfulness and equanimity still remain to be empirically explored.

We conducted a correlational study (N = 106) to investigate the relation between hours of mindfulness practice among former mindfulness-based stress reduction program participants and two components of equanimity: even-minded state of mind and hedonic independence, using the EQUA-S. A second study (N = 86) investigated experimentally the effect of two meditation practices on equanimity among novice participants.

These results confirmed the importance of empirically studying equanimity at both trait and state levels, and identifying its relation and specificities with meditation and related phenomena.
vorige artikel Body Dissatisfaction and Bulimic Symptoms: Moderator Roles of Compassionate and Uncompassionate Self-Responding
volgende artikel Politics Not as Usual in the Twenty-First Century 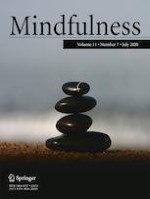