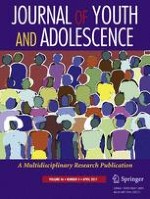 Emotional Awareness in Depressive and Anxiety Symptoms in Youth: A Meta-Analytic Review