Subjective quality of life (SQOL) is an established patient-reported outcome in the evaluation of treatments for psychosis. The use of SQOL measures in the presence of psychiatric symptoms and cognitive deficits has been questioned. However, there is little evidence on whether items function differently as indicators of SQOL in psychotic patients with different levels of symptoms and deficits. Substantial differential item functioning (DIF) would, indeed, challenge the validity of established measures. We aimed to investigate the validity of a widely used measure of subjective quality of life (SQOL), i.e., the Lancashire Quality of Life Profile (LQOLP), in the presence of cognitive deficits and psychiatric symptoms in patients with severe and enduring psychosis.

The findings suggest that the validity of the LQOLP in psychotic patients may be impaired by DIF due to psychopathology, although the magnitude of effects is unlikely to be of clinical significance. The validity appears not to be compromised by cognitive deficits. 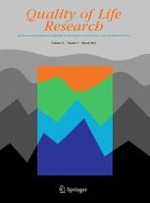 Quality of life in pregnancy and post-partum: a study in diabetic patients

Individual interviews and focus groups in patients with rheumatoid arthritis: a comparison of two qualitative methods