The Suicide (SPI) and Violence Potential Indices (VPI) from the Personality Assessment Inventory: A Preliminary Exploration of Validity in an Outpatient Psychiatric Sample | mijn-bsl Skip to main content
ZOEKEN MENU 1 2 3 4

Assessing risk of harm to self and others is an important component of psychological assessment, although methods for risk assessment vary considerably. The Personality Assessment Inventory (PAI) is frequently administered to evaluate general psychological functioning, as well as to provide information about suicide and violence risk. The purpose of this study was to evaluate the construct validity of the PAI Suicide (SPI) and Violence Potential (VPI) indices in a sample of 158 psychiatric outpatients referred for psychological and neuropsychological assessment within a large northeastern academic medical center between 2007 and 2011. Results generally supported the convergent and divergent validity of both SPI and VPI when evaluating groups with and without a history of suicide and violence risk, and effect sizes were moderate to large even after controlling for other covariates. SPI and VPI scores were also found to vary significantly across different psychiatric groups in ways that would be expected. Finally, we explored the relationship between SPI and VPI, and executive functioning impairment—a neuropsychological variable found to be associated with impulsive self and other-harming behaviors. Consistent with prior research, SPI and VPI were found to be significantly elevated in groups demonstrating executive dysfunction. The implications of these findings and specifically the utility of using SPI and VPI in the assessment of risk are discussed.
vorige artikel Childhood Characteristics of Adolescent Inpatients with Early-Onset and Adolescent-Onset Disruptive Behavior 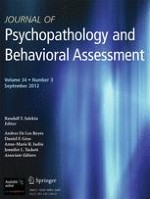