The Socratic Method has been described as an important component of CBT interventions yet an empirical case for its use has not been made. The objective of this paper is to review the role of the Socratic Method in CBT in four stages. First, a review of the literature describes how the Socratic Method is applied and defined within CBT, with assumptions regarding its proposed benefits identified. Second, a review of empirical literature demonstrates that multiple challenges to the evaluation of the Socratic Method exist and that no direct evidence supports the premise that it is beneficial in CBT. Evidence is examined which may suggest why the Socratic Method could be beneficial in therapy. Finally, the hypothesised function of the Socratic Method within therapy is discussed in reference to the Interacting Cognitive Subsystems framework. A number of avenues for future research are proposed in order to determine whether this potentially valuable therapeutic component contributes to the efficacy of CBT.
vorige artikel The Relationship Between Memory and Interpretation Biases, Difficulties with Emotion Regulation, and Disordered Eating in Young Women 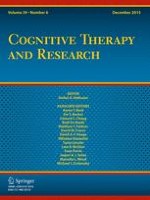 Autobiographical Memory Perspectives in Task and Suicide Attempt Recall: A Study of Young Adults With and Without Symptoms of Suicidality

Relation Between Attributional Style and Subsequent Depressive Symptoms: A Systematic Review and Meta-Analysis of Longitudinal Studies