The Social Communication Assessment for Toddlers with Autism (SCATA) was designed to measure non-verbal communication, including early and atypical communication, in young children with autism spectrum disorder. Each communicative act is scored according to its form, function, role and complexity. The SCATA was used to measure communicative ability longitudinally in two samples of toddlers with autism spectrum disorder. Overall frequency of non-verbal communicative acts did not change between the two assessments. However, the form and complexity, the function and the role the child took in the interaction did change with time. Both frequency and function of communicative acts in toddlerhood were positively associated with later language ability: social acts, comments and initiations showed greater predictive association than requests and responses.
vorige artikel DTkid: Interactive Simulation Software for Training Tutors of Children with Autism
volgende artikel Sociodemographic Risk Factors for Autism in a US Metropolitan Area 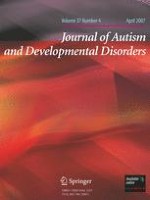