The stimulus–response compatibility (SRC) effect refers to the phenomenon that responses are faster and more accurate when stimulus and response correspond than when they do not. The phenomenon is robust in that it is observed even when SRC is irrelevant to performing the task, a variant known as the Simon effect. Recent studies also demonstrated that responses are faster when they are spatially compatible with their effects in the environment (action effects) than when they are incompatible. This response–effect (R–E) compatibility effect is thought to stem from the fact that stimuli first activate anticipated effect codes, which then activate corresponding action codes. In the present study, the Simon task was used to examine influences of multiple response components on performance. Three response components were orthogonally manipulated. The results of three experiments indicated that there are two separate processes that are influenced by R–E compatibility; one that is responsible for the SRC effect (S–R translation) and the other that is independent of SRC (action programming). The influence of R–E compatibility on the former process depended on manipulations that varied attentional demands of the task. 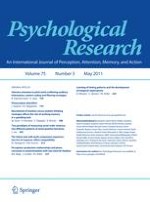 Learning of timing patterns and the development of temporal expectations