Previous studies have shown that completed prospective memory (PM) intentions entail aftereffects in terms of ongoing-task-performance decrements in trials containing repeated PM cues which previously served as PM cues triggering the intended action. Previous research reported that PM aftereffects decrease over time, thus revealing a specific time course of PM aftereffects. In the present study, we tested two accounts for this pattern, assuming either that the decline of aftereffects is related to the temporal distance to PM task completion or may be a result of the repeated exposure of repeated PM cues in the ongoing task. In three experiments, we manipulated both the temporal distance to PM task completion and the frequency of repeated PM cues and demonstrated that aftereffects of completed intentions declined with repeated exposure of formerly relevant PM cues. In addition, effects of repeated exposure were not only limited to the repetition of specific PM-cue exemplars but also generalized to other semantically related PM cues within the PM-cue category. Together, findings show that decreased aftereffects of completed intentions are not related to the temporal duration of the subsequent test block, but crucially depend on the repeated exposure of the previously relevant PM cues.
vorige artikel The difficulty of letting go: moderators of the deactivation of completed intentions
volgende artikel Metacognitive monitoring of attention performance and its influencing factors 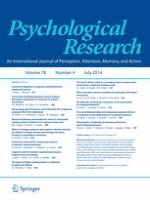 Effects of strategy sequences and response–stimulus intervals on children’s strategy selection and strategy execution: A study in computational estimation

Metacognitive monitoring of attention performance and its influencing factors

Attentional control of the creation and retrieval of stimulus–response bindings