Switch costs occur whenever participants are asked to switch between two or more task sets. In a typical task switching experiment, participants have to switch between two task sets composed of up to four different stimuli per task set. These 2 (task sets) × 4 (stimuli) contain only 8 different stimulus–response (S–R) mappings, and the question is why participants base their task performance on task sets instead of S–R mappings. The current experiments compared task performance based on task rules with performance based on single stimulus–response mappings. Participants were led to learn eight different S–R mappings with or without foreknowledge about two underlying task sets. Without task set information no difference between shifts and repetitions occurred, whereas introducing task sets at the beginning led to significant switch costs. Most importantly, introducing task sets in the middle of the experiment also resulted in significant switch costs. Furthermore, introducing task rules at the beginning of the experiment lead to slower RTs when simple stimuli (Experiment 1) had to be processed. This detrimental effect disappeared with more complex stimuli (Experiment 2). Results will be discussed with respect to cognitive control. 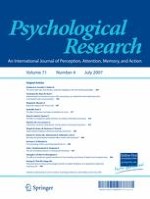 The role of working memory in carrying and borrowing

The effect of previous trial type on inhibition of return

The effect of exogenous spatial attention on auditory information processing

Collinearity, curvature interpolation, and the power of perceptual integration