The role of saccades in multitasking: towards an output-related view of eye movements | mijn-bsl Skip to main content
TOOLBAR 1 2 3 4
ZOEKEN MENU 1 2 3 4

The present paper presents an overview of research on the role of saccades in multitasking. Multitasking is known to cause performance costs in terms of increased response times and/or error rates. However, most of the previous research on multitasking was focused on manual and vocal action demands, and the role of eye movements has been largely neglected. As a consequence, saccade execution was mainly considered with respect to its functional role in gathering new visual information (input side of information processing). However, several more recent experiments confirmed that saccades both exhibit and cause dual-task costs in the context of other actions and should thus also be regarded as a response modality (output side of information processing). Theoretical implications as well as several open issues for future research will be outlined.

Titel
The role of saccades in multitasking: towards an output-related view of eye movements
Auteur:
Lynn Huestegge 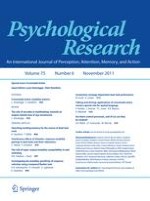 Searching working memory for the source of dual-task costs

Are there control processes, and (if so) can they be studied?