The Role of Rigidity in Adaptive and Maladaptive Families Assessed by FACES IV: The Points of View of Adolescents | mijn-bsl Skip to main content
TOOLBAR 1 2 3 4
ZOEKEN MENU 1 2 3 4

Adolescents were recruited from two high schools in Northern Italy. Parents provided written consent for their children’s participation: none of the parents refused consent and all children decided to participate. Data collection was carried out in the classrooms over 1 h, in the presence of the teacher and the researcher who administered the questionnaire. Participation in the study was voluntary and anonymous, and participants were encouraged to answer individually and as truthfully as possible.

The family adaptability and cohesion evaluation scale (FACES IV) was used to assess how adolescents perceived the functioning of their families. The Italian version based on the Olson’s last improvements added to FACES IV (Olson 2011) was validated by Baiocco et al. ( 2013) in a sample of adolescents and young adults. FACES IV contains 42 items that assess six dimensions on 7-items Likert-type scales (1-5 points); specifically two balanced subscales, cohesion and flexibility, assessing adaptive family functioning and four unbalanced subscales, enmeshment, disengagement, chaos and rigidity assessing maladaptive functioning. Items pertaining the dimensions of cohesion and flexibility concerned, respectively, the emotional bonding among family members (e.g. ‘‘In our family we like to spend our free time together’’) and the family leadership, rules, organization and negotiation (e.g. ‘‘In our family we have clear roles and rules’’). Sample items for the unbalanced subscales were: Enmeshment (e.g. “Family members feel pressured to spend most free time together”), disengagement (e.g. “Family members feel closer to people outside the family than to other family members”), chaos (e.g. “There is no leadership in this family”) and rigidity (“There are strict consequences for breaking the rules in our family”). In our study internal consistency was similar to the Italian validation (see Baiocco et al., 2013), we calculated the following alphas: cohesion (α = .78), flexibility (α = .70), enmeshment (α = .60), disengagement (α = .72), chaos (α = .56), and rigidity (α = .72).

Adolescents’ perception of parental monitoring was assessed with the Parental Monitoring Questionnaire (Kerr et al. 2012; Stattin and Kerr 2000), validated in Italy by Miranda et al. ( 2012). This scale is composed of 25 items used to assess four different domains of parental monitoring (Everri et al. in press; Racz and McMahon 2011; Wang et al. 2013) on a five-point Likert scale where 1 indicates ‘not at all’, and 5 ‘always’. The four dimensions of parental monitoring and the internal consistency calculated in our study are: (a) parental knowledge, assessed with a nine-item subscale assessing perceptions of parents’ knowledge about one’s whereabouts, activities and peers (α = .70), (b) youth disclosure, assessed with a five-item subscale capturing adolescents’ tendency to provide unsolicited information (α = .77); (c) parental control, assessed with a six-item subscale containing items asking about whether the adolescent is required to inform parents about where he or she will be and with whom (α = .79); (d) parental solicitation, assessed with a five-item subscale relating to parental tendency actively to seek information about the adolescent (α = .72). The internal consistency of our study was acceptable if compared with the Cronbach alphas of Miranda and colleagues’ validation (see Miranda et al. 2012): parental knowledge (α = .86), youth disclosure (α = .76), parental control (α = .84), parental solicitation (α = .75). Specifically, it is measured considering four different domains: parental knowledge, parental control, parental solicitation, and youth disclosure.

Family Satisfaction Scale (FSS) was developed by Olson (1995) in relation to the Circumplex model. We used the Italian adaptation by Baiocco et al. ( 2013). The scale assesses the degree of satisfaction with aspects related to family cohesion and flexibility, which was formulated in these items such as: “Your family’s ability to cope with stress”, “Your family’s ability to resolve conflict”, “Family members concern for each other”. The current version of the Family Satisfaction Scale contains 10 items on a Likert-type scale (α = .91) and is based on the original 14-item scale.

In order to disambiguate the role of rigidity in Olson’s Circumplex model and to determine the exact number of clusters emerged from adolescents’ perceptions, a LCA) was conducted using M-Plus 7.3.1 (Muthén and Muthén 2012). This method of analysis is generally used to explore how a set of unobserved subgroups of participants reliably differ in their points of view across a series of indicators (Hagenaars and McCutcheon 2002), which in our study were the Italian percentile scores on the six scales of FACES IV.
A multistage decision process combining fit statistics and substantive interpretability was chosen to decide the appropriate number of classes (Nylund et al. 2007). First, values of the Akaike information criteria (AIC) and Bayesian information criteria (BIC) were used to estimate the optimal number of classes (lower AIC and BIC values indicated better fitting models). Second, we used the entropy value ( E) and the probability of a case belonging to each class as overall measures of the solution reliability and stability (values equal or major of .70 were considered adequate) (Murphy et al. 2007). Third, using the Bootstrap Lo-Mendell-Rubin test (BLRT; Nylund et al. 2007) with n = 500 iterations, we selected the solution that provided a significant improvement in the fit achieved in a solution with k − 1 classes. In order to choose the best class solution criteria, at least 1 % of the sample in the classes was considered as well as their conceptual distinction. Maximum likelihood estimation with robust standard errors (MLR) algorithm was used to create the classes on the basis of the level of variables inserted.
Family typologies derived from LCA were explored by gender, age, and family structure using Chi square test with Monte Carlo significance based on 10,000 sampled tables. Moreover, in order to make an in-depth exploration of both the family typologies content emerged from the LCA, and their level of functioning, a multivariate and a univariate analysis of variance were conducted using the statistical package for the social sciences (SPSS 21.0): Family typologies were considered as an independent factor and monitoring subscales and satisfaction scale as dependent variables. 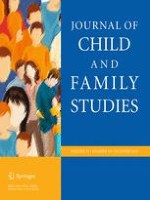