The current study experimentally tested the hypothesis that elevated facial appearance concern is characterised by an elevated tendency to experience task-irrelevant intrusions (i.e., intrusions which serve to interfere with task performance) concerning an appearance-related event. Additionally, the study examined potentially interactive roles of facial concerns and the appraisal perspective adopted during this appearance-related event.

Sixty-six females, reporting either low or high facial concerns, were exposed to a standardised appearance-related event, which involved a photoshoot and the subsequent appraisal of the resulting photographs. Participants were induced to appraise these photographs from the perspective of either self or other. Following this, participants completed a task designed to assess subsequent task-irrelevant intrusions about the appearance-related event.

The current findings are consistent with the hypothesis that elevated facial appearance concerns are underpinned by highly frequent and distressing task-irrelevant intrusions about past appearance-related experiences.
vorige artikel The Relative Impact of Cognitive and Behavioral Skill Comprehension and Use During CBT for Obsessive Compulsive Disorder
volgende artikel Attention Deployment to the Eye Region of Emotional Faces among Adolescents with and without Social Anxiety Disorder 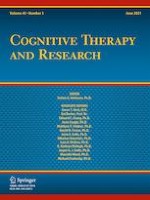 The Future of Cognitive Behavioral Therapy

The Theory of Modes: Applications to Schizophrenia and Other Psychological Conditions

The Impact of Moral-Based Appraisals on Psychological Outcomes in Response to Analogue Trauma: An Experimental Paradigm of Moral Injury