The purpose of this study was to examine relations between parents’ contingent responding and the behavior of their young children, in the context of other relevant parenting behaviors. Parents were observed interacting with their 3–6 year-old children during two laboratory tasks. Parent responses to child bids were classified into four mutually exclusive categories: contingent responses, non-contingent non-negative responses, negative responses, and no response. Hierarchical regression analyses were used to examine relations between contingent responsiveness and child compliance, after accounting for the quality of parent directives and parent negativity. Contingent responsiveness was uniquely associated with greater child compliance for mothers during both tasks and for fathers during one task. An interaction effect was found, indicating that fathers’ responsiveness during the second task was associated with greater child compliance in older, but not younger, children. Implications for clinical practice and future research directions are discussed.
vorige artikel Cross-Informant Agreement on Child and Adolescent Withdrawn Behavior: A Latent Class Approach
volgende artikel Maternal Pre-pregnancy Body Mass Index and Offspring Temperament and Behavior at 1 and 2 Years of Age 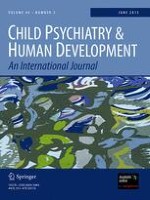 Classes of Psychotic Experiences in Kenyan Children and Adolescents

Anxiety-Promoting Parenting Behaviors: A Comparison of Anxious Parents with and without Social Anxiety Disorder