Using a cross-sectional design, we examined the relationship between naturally occurring levels of mindfulness and rumination in students (n = 164). As predicted, we found that, when controlling for current depressive symptoms and prior history of depression, mindfulness was significantly negatively correlated with rumination, but it was only associated with the extent to which rumination was experienced as uncontrollable, not with global levels of rumination. Furthermore, mindfulness moderated the relationship between global levels of rumination and uncontrollability of rumination, consistent with the suggestion that high dispositional mindfulness reduces the extent to which ruminative reactions tend to escalate into self-perpetuating and uncontrollable ruminative cycles.
volgende artikel Dispositional Mindfulness, Meditation, and Conditional Goal Setting 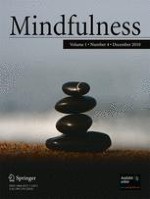