Although major depressive disorder (MDD) is associated with suicidal behaviors, some depressed individuals are not suicidal and others evidence various forms of suicidality. We thus investigated whether aspects of temperament and self-regulation of dysphoria represent risk factors for DSM-IV suicidality (recurrent thoughts of death, recurrent suicidal ideation, suicidal plan, and suicide attempt) in depressed youths. Using a sample of children with MDD (N = 407; ages 7–14 years), recruited from clinical sites across Hungary, we tested the hypotheses that: (a) suicidality is related to higher levels of trait negative emotionality as well as more maladaptive and fewer adaptive regulatory responses to dysphoria and (b) as the severity of suicidal behavior increases, levels of trait negative emotionality and dysfunctional emotion regulation also increase. We also explored if other aspects of temperament relate to suicidality. Children’s DSM-IV diagnoses were based on semi-structured interviews and best-estimate psychiatric consensus. Parents independently provided ratings of their children’s temperament, and children separately completed an inventory of emotion regulation (ER). Using multivariate models, we failed to confirm the hypothesized relations of negative trait emotionality and suicidality, but confirmed that high maladaptive and low adaptive ER response tendencies increase the odds of suicidal behaviors, above and beyond the risk posed by depressive illness severity. Unplanned interaction terms between temperament dimensions (other than negative emotionality) and ER suggested that at some high-extremes of temperament, ER has no impact on suicidality but in their absence, adaptive ER lowers the risk of suicidality. The practical implications of the findings are discussed. 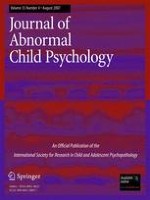 Do Friends’ Characteristics Moderate the Prospective Links between Peer Victimization and Reactive and Proactive Aggression?