The online version of this article (https://​doi.​org/​10.​1007/​s10567-019-00299-9) contains supplementary material, which is available to authorized users.
Linda Goos and Nikki Weenink both authors equally contributed to this article. 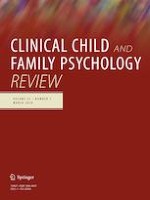 Addressing the “Myth” of Racial Trauma: Developmental and Ecological Considerations for Youth of Color

A Meta-analysis to Guide the Enhancement of CBT for Childhood Anxiety: Exposure Over Anxiety Management

An Emotion Recognition–Awareness Vulnerability Hypothesis for Depression in Adolescence: A Systematic Review

Conceptualizing Digital Stress in Adolescents and Young Adults: Toward the Development of an Empirically Based Model