Child conduct problems are generally treated as a latent construct or as an additive index, where indicators are considered equally reflective indicators, in line with the “common cause hypothesis”. The current study presents a third alternative, where conduct problems constitute behaviors that associate and interact, in terms of a multivariate network structure. The aims of the study were to investigate the network structure of conduct problems and reveal strongly connected and central behaviors. Child gender and age were included into the analyses to uncover how these relate to the specific behaviors. The sample comprised of parent-reported data of 551 Norwegian children (age 3–12) with moderate to high levels of conduct problems, who reported intensity of 22 behaviors using the Eyberg Child Behavior Inventory. The research questions were examined by estimating a correlational and partial correlational LASSO network of conduct problems. Results showed that behaviors in general were positively connected. The majority of behaviors clustered into two distinct domains, reflecting inattention and oppositional defiant behavior. Furthermore, results showed that behaviors showed differential centrality, i.e., not all behaviors were equally important to the conceptualization of child conduct problems. Implications of the results for assessment and intervention are discussed. 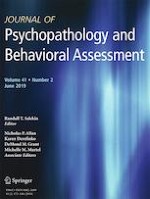 Validation of the Deviant Peers Scale in Spanish Adolescents: a New Measure to Assess Antisocial Behaviour in Peers

Self-Evaluation and Depressive Symptoms: A Latent Variable Analysis of Self-Esteem, Shame-Proneness, and Self-Criticism

Links between Perceived Containment and Reactive and Proactive Functions of Aggression among Detained Youth: Does Behavioral Inhibition and/or Activation Matter?

Development and Initial Validation of the Adolescent Routines Questionnaire: Parent and Self-Report