Based on Bronfenbrenner's (1999) ecological perspective, a longitudinal, prospective model of individual differences in the quality of home environment (Home Observation for Measurement of the Environment—HOME) was tested in a sample of 179 Brazilian children and their families. Perinatal measures of family socioeconomic status (SES) and child birth weight had direct effects on HOME at preschool age. As either family SES or child birth weight increased, HOME also increased through diminished emotional distress in the mother a month following childbirth. SES had a negative effect on number of children in the household, which in turn had a long-term negative impact on HOME. Compared to mothers who had reported not to plan their pregnancy, those who did were more likely to have fewer children, to report more spouse support during childbearing, and to show less emotional distress a month after childbirth, all of which also influenced HOME at preschool age. These findings are discussed in light of the broader socio-ecological Brazilian context, with direct implications to clinical practice aimed at improving the quality of home environment. 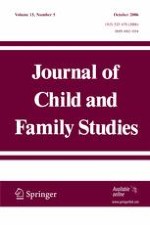 Children of Incarcerated Mothers and Their Caregivers: Factors Affecting the Quality of Their Relationship