The Harter Self-Perception Profile for Children (SPPC) is one of the most commonly used measures of childhood self-esteem, yet there is little research assessing the psychometric properties of the SPPC for use with an African American population. A sample of 92 African American adolescent females (M age = 12.33) was administered the SPPC in order to assess its suitability for this population in three ways. First, an exploratory factor analysis demonstrated complex components without any factors being identical to the normative factors. The greatest differences were within the behavior and scholastic subscales which had items cross loading on three different factors. Second, the SPPC demonstrated only moderate internal reliability with subscale alpha coefficients ranging from .71 to .82. Third, a comparison with the Rosenberg Self-esteem Scale provided evidence of poor convergent validity. These results raise questions about the validity of the SPPC for use with African American adolescent females. 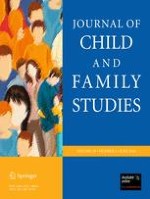 Is Family Expressiveness as Reported by Mothers and Fathers Related to Children’s Social Anxiety Symptoms?

Emotional Development in the Context of Conflict: The Indirect Effects of Interparental Violence on Children