Each article was reviewed based on five quality criteria (see Supplementary Materials 1 for table) which control for key threats to validity in sample selection (sample identification, assessment of autism, measurement of IQ, measurement of adaptive functioning and measurement of self-injurious behaviour). The quality criteria were adapted from Richards et al., ( 2015) and Surtees et al. ( 2018). For visual ease of interpretation, the criteria for each article were coded as red for a poor score of 0, yellow for an adequate score of 1, amber for a good score of 2 and green for an excellent score of 3. For example, for the criterion assessing the quality of measurement of self-injury/self-harm, a score of 0 (red) was attributed to papers that did not specify how self-injury was measured, a score of 1 (yellow) was attributed to papers that reported using non-validated informant report measures, a score of 2 (amber) was attributed to papers that used direct observation of self-injury or formal, validated informant report scales for self-injury and a score of 3 (green) was attributed to papers that obtained a consensus estimate of self-injury, combining data from multiple assessments including at least one direct observation or formal, validated scale.
This method provides a simple visual matrix that evidences the quality of each paper. The quality weighting for each paper was then calculated by dividing the total quality score by the maximum possible total of fifteen. All studies which met the inclusion criteria were reviewed by the author and rated for quality using these criteria. Inter-rater reliability was established by a second researcher independently reviewing a subset of studies (N = 8) to ascertain the reliability of the criteria. Inter-rater reliability for total quality weighting was good ( r = 0.923; p = 0.001).

A total of 3350 papers were identified by searching the databases. These papers were assessed for suitability for inclusion using the follow stages:

The titles and abstracts of all papers were screened by the researcher. Table 1 outlines the inclusion and exclusion criteria used to assess for suitability at this stage. In cases where suitability was unclear a second researcher reviewed the paper and consensus was derived.
Table 1
Inclusion and exclusion criteria for screening
aSamples that included autism of known genetic cause such as fragile X Syndrome and tuberous sclerosis complex were excluded from this meta-analysis on the basis that it would not be possible to delineate self-injurious behaviour in autism from self-injurious behaviour associated with the genetic syndrome

The quality of the remaining papers was then assessed according to the quality criteria outlined in Table 2. The flowchart presented below uses the PRISMA model (Moher et al. 2009) to outline the number of papers excluded at each stage of review (see Fig.  1).
× 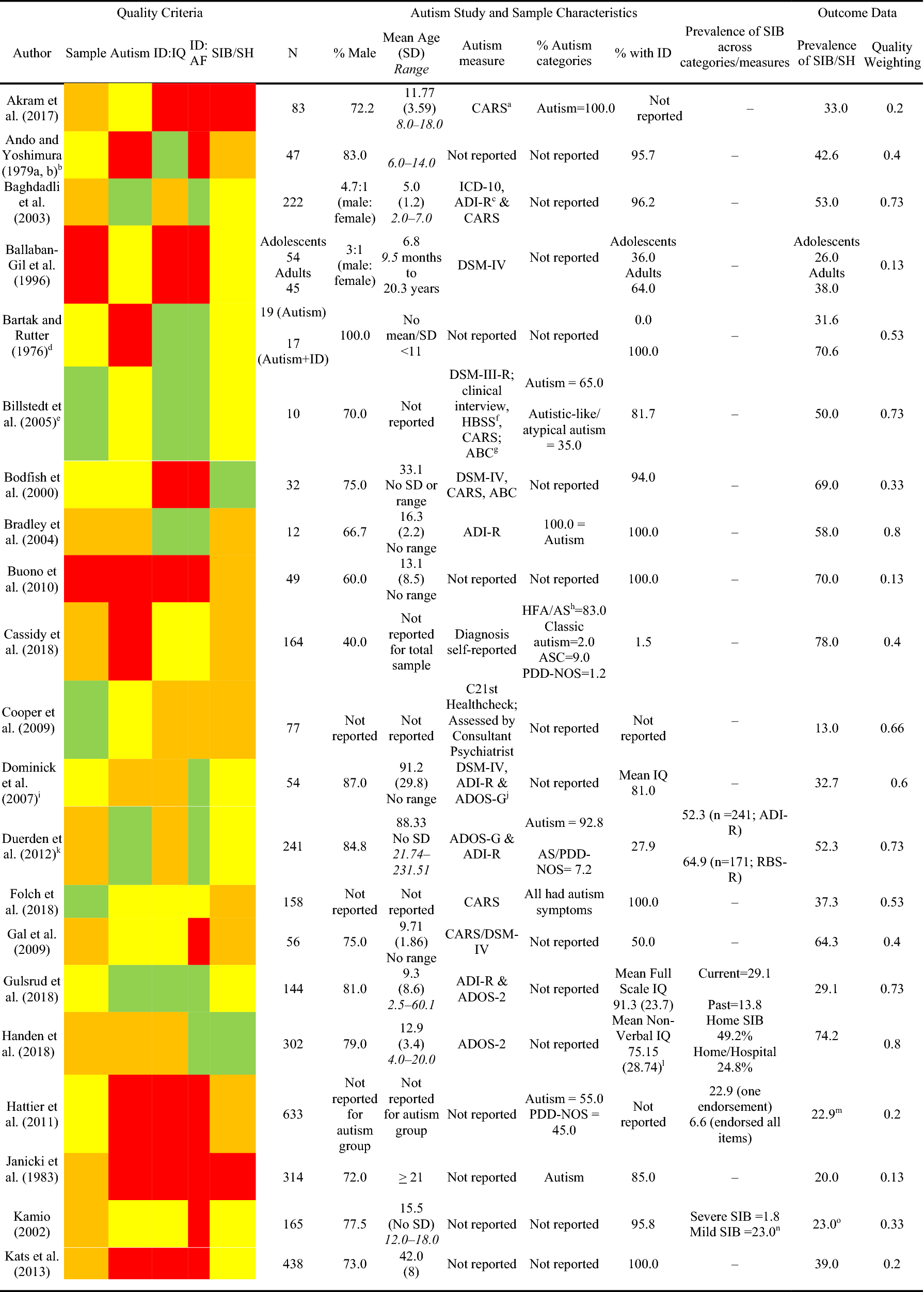 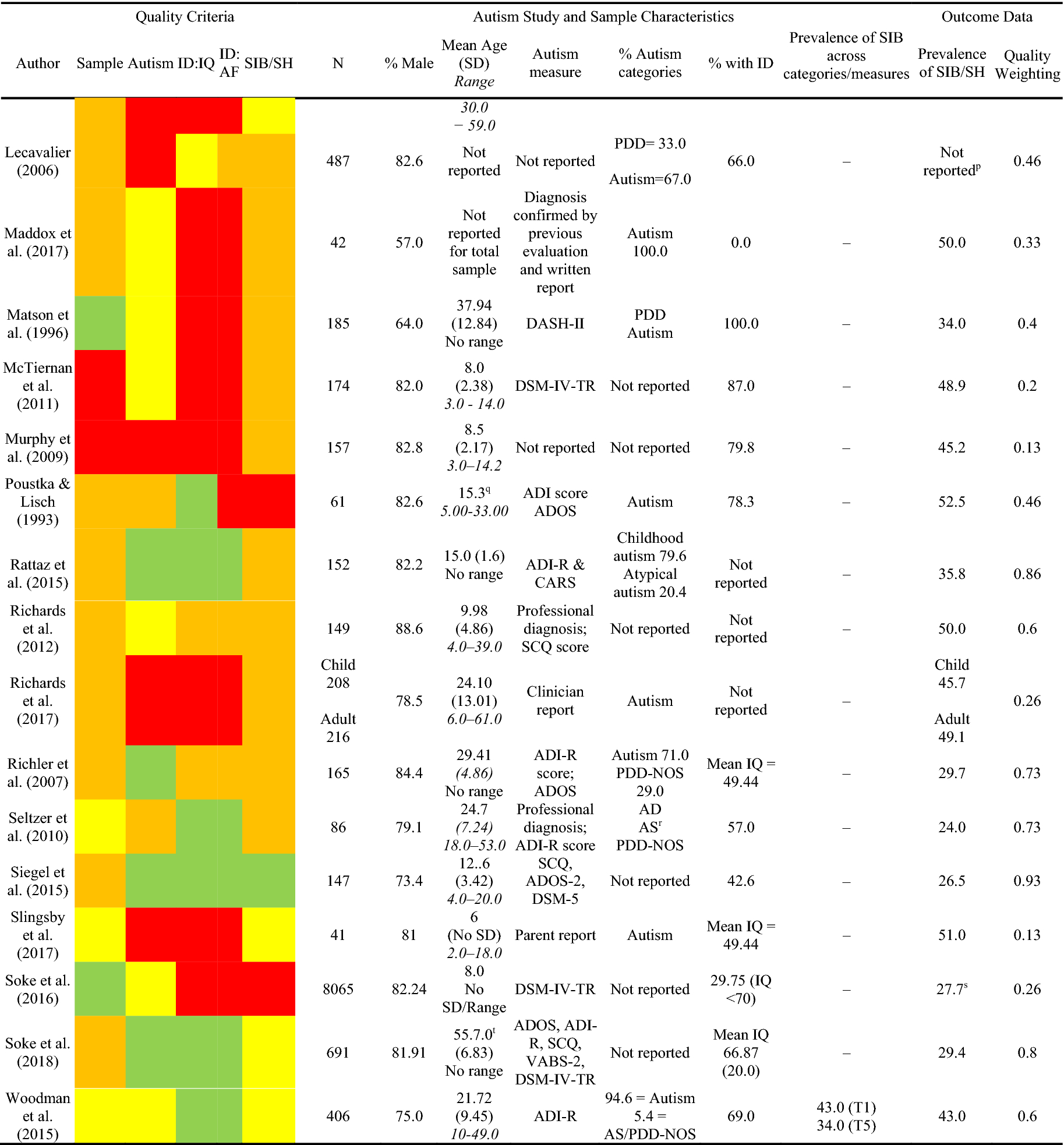 In order to explore the influence of individual participant characteristics such as age, gender and presence of intellectual disability on prevalence rates of self-injurious behaviour, a series of meta-regression analyses were conducted. Due to insufficient data, it was not possible to meta-analyse the influence of autism severity on prevalence rates, however, those studies that did report these data are described.
In order to describe the prevalence rates of different topographies of self-injurious behaviour, the number of participants engaging in each topography was extracted from the papers that reported on topography. These data were analysed using the random-effects model to generate pooled prevalence estimates for each topography of behaviour.
Finally, in order to explore the impact of influential studies on the overall meta-analytic effect, a Baujat chart of sources of heterogeneity was used. Baujat et al. ( 2002) have proposed this method to explore heterogeneity which considers the impact of influential studies on the outcome of interest, in this instance, prevalence rates.

Prevalence of Self-injury in Autism

A total of 37 primary studies reporting a total of 14,379 participants were identified as suitable for inclusion in the current meta-analysis. In order to assess the first aim of the meta-analysis, each study was evaluated against the quality criteria and data describing the study, sample characteristics (e.g. age, gender, autism characteristics, and presence of an intellectual disability) and total prevalence of self-injurious behaviour/self-harm were extracted and analysed to generate pooled prevalence estimates (see Table 3).
Across all studies, only five (13.5%) papers met criteria for the highest quality rating for sample identification, seven (18.9%) for autism assessment, 11 (29.7%) for assessment of IQ, 13 (35.1%) for assessment of adaptive functioning and three (8.1%) for measurement of self-injurious behaviour. Whilst the majority of papers (N = 25; 67.5%) reported the proportion of the sample that had an intellectual disability, assessment of intellectual disability received the highest number of poor ratings with 14 (37%) studies for assessment of IQ and 18 studies (48.6%) for assessment of adaptive functioning being rated as poor. In addition to reporting the prevalence of self-injurious behaviour, 16 studies (43.2%) reported prevalence of different topographies of behaviour. No studies were excluded on the basis of quality as doing so would result in the loss of valuable data obtained from large samples of participants. Instead, analyses of the effect of methodological quality was conducted to determine the possible influence of poorer quality studies on prevalence estimates. Just over 50% of studies received a good (N = 19; 51.3%) rating for sample identification suggesting that the prevalence data reported in these studies were obtained from representative samples.
In order to achieve the first aim of the meta-analysis, prevalence rates of self-injurious behaviour in autism were synthesised and a random-effects pooled prevalence estimate was generated based on the 37 studies that met the inclusion criteria (see Fig.  2).
×
The random-effects model was calculated using the generic inverse variance method and generated a weighted prevalence estimate of 42% (z = 17.71, p ≤ 0.001; CI 38–47%) for self-injurious behaviour in autism.
An unacceptable level of heterogeneity between the prevalence rates reported in the primary studies was observed (tau 2 = 0.019, Higgin’s I 2 = 96%; Q = 958.84, p < 0.001), which suggests that the estimates of the primary studies are biased by the presence of uncontrolled and potentially confounding factors.

Heterogeneity due to Study Level Characteristics

In order to assess the impact of study level characteristics upon heterogeneity, a series of subgroup analyses were conducted on the prevalence rates of self-injurious behaviour based on the quality ratings of poor, adequate, good and excellent for each of the five types of methodological bias (see Table 4).
Table 4
Sub-group analysis of the prevalence rates (%) of SIB based on the quality ratings for each type of methodological bias
A mixed effects ANOVA was computed to test the difference between the proportions (Q) with associated probability levels ( p)
The results of the sub-group analysis indicated that none of the indices of risk of bias evidenced significant differences in the estimated prevalence of self-injurious behaviour.

To examine the influence of individual studies to the overall effect, a baujat chart of sources of heterogeneity was plotted (see Fig.  3). On the x-axis the contribution of each study to the overall heterogeneity statistic is plotted; higher values on the x-axis reflect increasing heterogeneity associated with the omission of a study. On the y-axis the standardised difference of the overall treatment effect with and without each study is plotted; this quantity describes the influence of each study on the overall effect and higher values on the y-axis reflect greater change in the omnibus effect associated with the omission of a study. No studies fell within the area of high heterogeneity and high influence, although the study by Soke et al., ( 2016) exerted the highest influence on the overall effect.
×
Second, to examine whether any particular study or studies exerted a disproportionately high influence on the overall meta-analytic effect, a “leave-one-out” analysis, in which the random effects model was calculated with each of the primary studies removed in turn, was conducted (see Fig.  4). If omitting a study results in an effect that lies outside of the 95% CI for the complete meta-analysis then that study is deemed to have a disproportionate influence and is removed from the omnibus test. The study by Soke et al. ( 2016) strongly influenced the overall result but was not markedly heterogeneous to the other studies. The reason why it exerted influence over the overall result was due to sample size (N = 8065) and therefore this study was not considered to be problematic.
×
The “leave-one-out” analysis did not alter the prevalence estimate, including the very large sample in the Soke et al. ( 2016) paper, and therefore no studies were considered disproportionally influential on the overall meta-analytic effect. 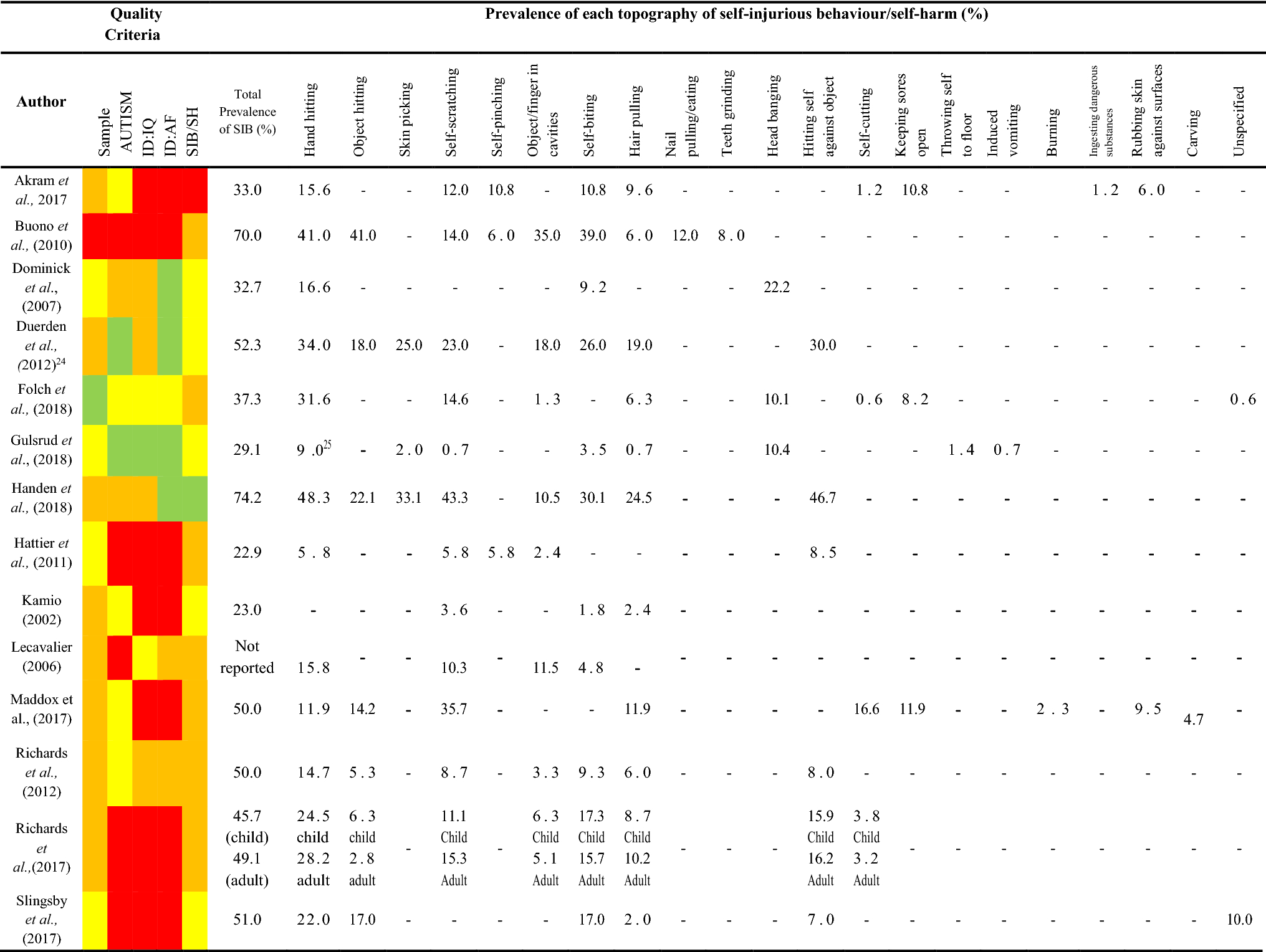 A total of 13 topographies of self-injurious behaviour were analysed. Topographies that were only reported by one study were excluded from the meta-analysis (N = 8). For brevity, the forest plots, prevalence rates, confidence intervals and weighting assigned by the random effects model for each topography of behaviour can be found in Supplementary Materials 3. For studies that calculated prevalence of topography as a percentage of the number that showed self-injury, this was converted to a percentage of the total sample in order to generate pooled prevalence estimates. Figure  5 presents the pooled random effects prevalence with associated confidence intervals for each of the 13 topographies.
×

In order to conduct a meta-regression analysis, it is recommended to include at least ten studies which report data on the outcome of interest (Higgins 2008). As such, meta-regression analyses looking at the influence of participant characteristics on prevalence of behaviour topography were only conducted on four topographies that had sufficient studies reporting data; hair pulling, hand hitting, self-biting and self-scratching. However, not all of the papers that reported data on these topographies included data on intellectual disability, age and gender, therefore, the results of the meta-regression analysis should be interpreted with caution (Table 7).
Table 7
Participant characteristics influencing prevalence of hair pulling, hand biting, self-biting and self-scratching
The association between the proportion of participants with an intellectual disability and prevalence of hair pulling and self-scratching was found to be significant ( p = 0.008 and p = 0.002, respectively) suggesting that presence of an intellectual disability may increase the prevalence of these topographies of self-injurious behaviour. However, there were no other significant associations between participant characteristics and prevalence of different topographies of self-injurious behaviour.

The authors declare that they have no conflicts of interest.
Open AccessThis article is licensed under a Creative Commons Attribution 4.0 International License, which permits use, sharing, adaptation, distribution and reproduction in any medium or format, as long as you give appropriate credit to the original author(s) and the source, provide a link to the Creative Commons licence, and indicate if changes were made. The images or other third party material in this article are included in the article's Creative Commons licence, unless indicated otherwise in a credit line to the material. If material is not included in the article's Creative Commons licence and your intended use is not permitted by statutory regulation or exceeds the permitted use, you will need to obtain permission directly from the copyright holder. To view a copy of this licence, visit http://​creativecommons.​org/​licenses/​by/​4.​0/​.

Springer Nature remains neutral with regard to jurisdictional claims in published maps and institutional affiliations.
Footnotes
1
Where a study reports more than one prevalence figure for self-injurious behaviour, a decision on which figure to include in the meta-analysis was made on an individual basis. Reasons for the decision are included as a footnote for each study in Table 3. 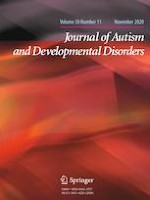 Brief Report: Impact of a Physical Exercise Intervention on Emotion Regulation and Behavioral Functioning in Children with Autism Spectrum Disorder

Effects of a Universal School-Based Mental Health Program on the Self-concept, Coping Skills, and Perceptions of Social Support of Students with Developmental Disabilities