As screens become even more embedded in the everyday lives of young children, understanding the predictors of screen time becomes increasingly important. Our study investigated the predictors of total screen time on a weekday for children at two years of age using data from the Growing Up in New Zealand longitudinal (GUiNZ) study. Our selection of variables was informed by previous research into the predictors of screen time for children aged up to three years, as well as the wider literature on parenting and children’s media exposure. We hypothesised that parenting behaviours related to the home media environment would be the most important variables overall. These included coviewing, exposure of children to adult-directed content, TV environment and rules restricting the amount of time that children can spend watching TV, DVD or video. A model including mother, partner and child variables (N = 3081) was tested using GLM Poisson regression in SPSS. Results demonstrated that children’s higher use of screen media on a weekday was significantly associated with exposure to a moderate to high or heavy TV environment compared to a low TV environment, exposure to adult-directed TV or DVDs, having no rules about how much time the child can spend viewing TV or videos or DVDs, the child being of Asian ethnicity compared to European ethnicity, and the child not attending childcare regularly. Higher coviewing with the child was significantly negatively, or inversely, associated with screen time. We consider practice implications for children’s screen time, study limitations, and recommendations for future research.
vorige artikel Intergenerational Transmission of Childhood Maltreatment Mediated by Maternal Emotion Dysregulation 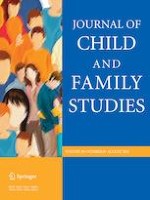