The Perceived Stress Scale (PSS; Cohen, Kamarck, & Mermelstein, Journal of Health and Social Behavior, 24: 385–396, 1983) and its derivatives are among the most commonly used self-report measures of subjective global stress. Several factorial models of the PSS have been proposed; however, which of these structures reliably measures individuals with mental illness remains unclear. Moreover, despite the detection of gender differences in perceived stress, factorial invariance between genders has not yet been tested with the PSS. Confirmatory factor analysis evaluating six prevailing factorial models of the PSS among a large sample of psychiatric patients and a matched community sample supported a two-factor model. Multiple group analysis established configural, metric and scalar invariance of this model across gender, but only configural invariance across samples differing by mental health status. Implications are that gender differences can be cautiously interpreted as true mean differences rather than artifacts of measurement bias; however, mean perceived stress factor scores should not be compared directly across psychiatric and non-psychiatric samples. 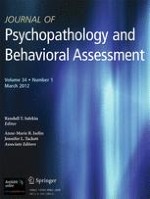