» Toegang tot de volledige tekst krijgen
Belangrijke opmerkingen
The original version of this article was revised due to a retrospective Open Access order.
A correction to this article is available online at https://​doi.​org/​10.​1007/​s12671-020-01405-7.

This article examines to what extent the teaching of mindfulness-based stress reduction (MBSR) can accurately be referred to by the term “McMindfulness.” The application of this term appears to rest on the expectation that teachers of MBSR and similar mindfulness programs, in order to be true to their Buddhist heritage, should inculcate political awareness in their patients, motivating them to resist the neoliberal capitalist system. Moreover, another assumption seems to be that present-moment awareness, viewed as another departure from ancient Indian Buddhism, prevents critical thinking and thereby supports obedient submission to exploitative conditions. Closer examination shows that expecting mindfulness teachers to stimulate political activism is not in keeping with relevant Buddhist antecedents. The relevant sources even testify to the employment of mindfulness for mere health benefits already in ancient India. Besides, the same textual sources show that mindfulness of the present moment is not a later innovation. The belief that such mindful presence disables critical thinking appears to mistake the goal of the cultivation of mindfulness for the mere absence of thoughts. At least as far as MBSR and related programs in healthcare are concerned, the term “McMindfulness” is not justified and its recent indiscriminate application to any contemporary mindfulness practice appears to have turned it into a myth. Rather than being merely a tool to ensure subservience to the neoliberal capitalist system, in view of the impending climate catastrophe, mindfulness can offer an important resource to face the ravages caused by unbridled exploitation of the environment. 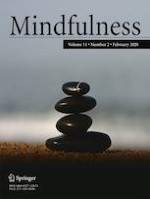 (How) Do Therapists Use Mindfulness in Their Clinical Work? A Study on the Implementation of Mindfulness Interventions

Any Ideal of Practice is Just Another Fabrication