The Multidimensionality of Racial/Ethnic Socialization: Scale Construction for the Cultural and Racial Experiences of Socialization (CARES) | mijn-bsl Skip to main content
ZOEKEN MENU 1 2 3 4

Negotiating racial politics in the United States is a rapidly transforming and dynamic matter. As a result, racial/ethnic socialization (R/ES) measurement must match this transformation to reflect the current processes utilized by Black Americans to manage racial conflict. We describe the scale construction of the Cultural and Racial Experiences of Socialization (CARES), a multidimensional assessment of R/ES based on Racial Encounter Coping Appraisal and Socialization theory. Additionally, we tested the CARES for its relation with gender and perceived racism. Utilizing a national sample of 373 Black college students, Exploratory Factor Analysis revealed the CARES to have 35 items and a 5 factor-solution. The CARES demonstrated strong overall internal consistency and its factors had moderate to strong internal consistency coefficients. The CARES factors allude to the complex role of R/ES as a social cognitive strategy for managing racial conflict. New concepts include both racism and bicultural coping strategies. We move beyond traditional concepts of cultural mistrust, which focus on a suspicion of the motives of White people, with the Racial Stereotyping factor that includes messages conveying cynical views of other Black people based on social class, gender and colorism. Gender differences in R/ES indicate that parents may perceive the consequences of racial conflict and miscues to be more dismal for their sons than their daughters. Interaction effects were found between R/ES and perceived racism. Family practitioners can use the findings to guide parents that are vacillating on the importance of discussing racial hierarchies with their children.
vorige artikel Pretend Play in Italian Children: Validation of the Affect in Play Scale-Preschool Version
volgende artikel Can We Use Convergence Between Caregiver Reports of Adolescent Mental Health to Index Severity of Adolescent Mental Health Concerns? 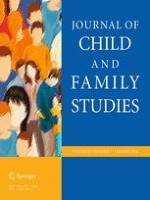 Effects of Socio-Demographic Factors on Parental Monitoring, and Regimen Adherence Among Adolescents with Type 1 Diabetes: A Moderation Analysis

Understanding the Role of Technology in Adolescent Dating and Dating Violence

Learning Perfectionism and Learning Burnout in a Primary School Student Sample: A Test of a Learning-Stress Mediation Model