The Meaning of Mindfulness in Children and Adolescents: Further Validation of the Child and Adolescent Mindfulness Measure (CAMM) in Two Independent Samples from The Netherlands | mijn-bsl Skip to main content
ZOEKEN MENU 1 2 3 4

Factor structure, internal consistency, and construct validity of the Dutch version of the Child and Adolescent Mindfulness Measure (CAMM) were studied in two samples of school children and adolescents (n = 275, 10–12 years and n = 560, 13–16 years) from The Netherlands, using principle factor analysis. In both samples, a single component showed a good fit. However, evidence was also found for a solution with two components in both samples. That is, for children as well as adolescents, a main component referring to “present-moment non-judgmental awareness” arose, but for children a second component of “suppressing or avoiding thoughts and feelings” arose whereas for adolescents “distractibility or difficulty paying attention” became apparent as a second component. The ten-item CAMM showed satisfactory internal consistency (α = 0.71 for children, and α = 0.80 for adolescents). As hypothesized, we found significant, moderate to strong positive correlations for the child and adolescent samples between the CAMM and measures of happiness, healthy self-regulation, and quality of life. We further found significant, moderate to strong negative correlations with stress, rumination, self-blame, and catastrophizing. Only the expected positive correlation with acceptance was not found. There was no difference between children with or without meditation experience on the CAMM; however, adolescents with meditation experience showed a significantly lower score on the CAMM than those without this experience. Overall, good psychometric properties were demonstrated and were comparable with the original CAMM. Mindful awareness and being non-judgmental appears a measurable concept in children and adolescents and can be considered an important protective construct in the mental health of not only adults, but also of children and adolescents.
vorige artikel Comparing Self-Compassion, Mindfulness, and Psychological Inflexibility as Predictors of Psychological Health
volgende artikel Meditation in the Higher-Education Classroom: Meditation Training Improves Student Knowledge Retention during Lectures 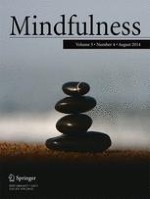 Rethinking Mindfulness in the Therapeutic Relationship