The study was embedded in the Generation R Study, a prospective population-based cohort study investigating growth, development, and health from fetal life onwards in Rotterdam, the second largest city in the Netherlands (Jaddoe et al. 2010). The study area is defined by postal codes and covers more than half of the city’s inhabitants. Mothers with a delivery date between April 2002 and January 2006 were eligible and were informed about the study by midwives and obstetricians at their first prenatal visit. Thereafter, the study staff contacted these mothers to provide additional information and to obtain informed consent. Written informed consent was obtained from all adult participants. Detailed measurements were obtained in a subgroup of children of Dutch national origin (the Generation R Focus Study cohort), meaning that the children, their parents, and their grandparents were all born in the Netherlands (e.g., Luijk et al. 2010). The study was approved by the Medical Ethics Committee of the Erasmus Medical Center, Rotterdam.

For a total of 584 children, data specifically on observed maternal parenting at the 3-year visit and parent report on ADHD symptoms at age 8 was available. Thirty-seven families were excluded due to technical or procedural difficulties during observations or due to participation with twins. The final sample for analysis consisted of 547 unique mother-child dyads. The mother-child dyads excluded from the analyses did not differ on any of the background variables, covariates, or main outcomes. Descriptive statistics are provided in Table 1. Child sex, maternal age, and educational level were reported at study intake. Educational level was dichotomized as “high” (68%; at least higher vocational training or a bachelor’s degree) and “low/medium” (32%).
Table 1
Sample characteristics ( N = 547)
Unless otherwise indicated, median ( IQR) of the untransformed variables in the original dataset are reported
aPercentage of total sample
b N = 523
c N = 519
d N = 515
† Values are mean ( SD)

The occurrence of ADHD and ODD symptoms was assessed with parent-report at age 8 using the Dutch version of the Conners’ Parent Rating Scale-Revised: Short Form (CPRS-R:S; Conners 1997). In this 27-item questionnaire, the primary caregiver (90% mothers) reports on child problem behavior in the past month on four scales; ADHD, Cognitive Problems/Inattention, Hyperactivity, and Oppositional behavior. All items are rated on a 4-point scale, ranging from 0 ( not true at all) to 3 ( very much true). Higher scores indicate more ADHD-related behaviors. The scores on the ADHD subscale (12 items), for example ‘short attention span’ and Oppositional subscale (6 items), for example ‘loses temper’, were used for this study. Composite scores for ADHD and ODD were positively skewed and square root transformed to approach normality. In the current study sample, high internal consistencies were found for the total scale, ADHD subscale, and Oppositional subscale (respectively, Cronbach’s α = 0.94; α = 0.91; α = 0.81).

The Dutch version of the Brief Symptom Inventory (Derogatis 1983) was used to assess maternal depressive symptoms at age 3. Scores were positively skewed and log-transformed to approach normality. Maternal depression was included as a covariate in all models. In the current sample, internal consistency of the depression subscale was high (Cronbach’s α = 0.75).
Mothers reported on their use of harsh discipline at the 3-year follow-up with the Parent-Child Conflict Tactics Scales (PC-CTS; Straus et al. 1998). Harsh parenting was positively skewed and square root transformed to approach normality. Since harsh parenting needs to be differentiated especially from negative discipline, it was added as a covariate specifically to these two regression models, but not to the sensitivity and positive discipline models. Internal consistency was poor in the current sample (Cronbach’s α = 0.51).

To explore the effect of maternal parenting beyond pre-existing child attention and EF problems on later child ADHD, these potential precursors were added in a separate step in the regression model. Attention problems were assessed via parent-report on the five items of the attention syndrome scale of the Dutch Child Behavior Checklist 1.5–5 at age 3 (CBCL; Achenbach and Rescorla 2002). This score was positively skewed and square root transformed to approach normality. Internal consistency for the attention problems subscale was moderate in the current study sample (Cronbach’s α = 0.64).
Executive function problems were assessed with the Dutch version of the Behavior Rating Inventory of Executive Function-Preschool Version at age 4 (BRIEF-P; Gioia et al. 2003). In this 63-item questionnaire, parents report on child EF domains, e.g., inhibition, shifting, and emotional control in the past month. A higher Global Executive Composite (GEC) T-score (adjusted for age group and sex) on the BRIEF-P represents more overall EF problems. The GEC was positively skewed and transformed inversely to approach a normal distribution, after which it was mirrored to facilitate interpretation. In the current study sample, internal consistency of the total scale was excellent (Cronbach’s α = 0.94).

Due to missing data on maternal educational level ( n = 4), maternal depressive symptoms ( n = 24) maternal harsh discipline ( n = 27), child attention problems ( n = 28), and child EF problems ( n = 32) we generated 20 imputed datasets by multiple imputation. Based on between-group comparisons for the five aforementioned variables with missing data and Little’s MCAR Test, we found that these date were missing (completely) at random. Analyses conducted with the imputed datasets ( N = 547) yielded similar results compared to the analyses with the complete dataset ( N = 515). Results with the imputed dataset are presented unless otherwise indicated.
First, bivariate associations among maternal parenting, child ADHD symptoms, covariates, and background variables were explored with Pearson’s correlations and t-tests. Second, we performed three separate linear regression analyses to examine whether each of the three aspects of observed maternal parenting at age 3 (positive discipline, negative discipline, sensitivity) predicted ADHD symptoms at age 8, independent of pre-existing child attention and EF problems, comorbid ODD symptoms, maternal depressive symptoms, and background variables. Each model was composed of four blocks. In the first block, all covariates were entered. In the second block, child attention and EF problems were added. In the third block, comorbid ODD symptoms were added. In the final block, maternal parenting (i.e., sensitivity, positive discipline, or negative discipline) was entered. Third, a regression analysis including all three parenting variables in the final block (and covariates in the previous blocks) was performed, to isolate the impact of the individual elements of parenting. Lastly, sex differences in the association between observed parenting and ADHD were explored, by examining interactions between parenting and child sex on ADHD symptomatology.

Our findings illustrate the unique contribution of maternal sensitivity, beyond pre-existing attention and EF problems, and ODD comorbidity, in the development of attention and hyperactivity problems in children. Although a modest association between maternal sensitivity and child ADHD symptoms was found, this finding further increases the understanding of the etiology of core ADHD symptoms. Also, it provides an avenue for the incorporation of parental sensitivity into psychoeducation or parental guidance programs aimed at ADHD symptomatology.

We gratefully acknowledge the contribution of Marinus van IJzendoorn and Marian Bakermans-Kranenburg to the design of data collection on parenting behavior. The Generation R Study is conducted by the Erasmus Medical Center in close collaboration with the Erasmus University Rotterdam, School of Law and School of Social and Behavioural Sciences; the Municipal Health Service Rotterdam area, Rotterdam; the Rotterdam Homecare Foundation, Rotterdam; and the Stichting Trombosedienst & Artsenlaboratorium Rijnmond (STAR), Rotterdam. We gratefully acknowledge the contribution of general practitioners, hospitals, midwives and pharmacies in Rotterdam.

Frank Verhulst publishes the Dutch translations of ASEBA from which he receives remuneration.

The study was approved by the Medical Ethics Committee of the Erasmus Medical Center, Rotterdam.

For the purpose of this study written informed consent was obtained from all adult participants.
Open Access This article is distributed under the terms of the Creative Commons Attribution 4.0 International License (http://creativecommons.org/licenses/by/4.0/), which permits unrestricted use, distribution, and reproduction in any medium, provided you give appropriate credit to the original author(s) and the source, provide a link to the Creative Commons license, and indicate if changes were made. 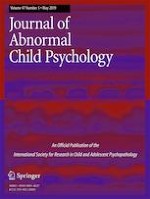 Dyadic Peer Interactions: the Impact of Aggression on Impression Formation with New Peers

Parental Reactivity to Disruptive Behavior in Toddlerhood: An Experimental Study