The Link between Competitive Sport Participation and Self-concept in Early Adolescence: A Consideration of Gender and Sport Orientation | mijn-bsl Skip to main content
ZOEKEN MENU 1 2 3 4

The current study explored specific aspects of sports and individuals on 4 domains of the self-system (physical competence and physical appearance self-concept, global physical and general self-esteem). Participants were 351 adolescents (M age = 13.45, SD = 1.25 years, males n = 132) recruited from elite sports and regular school classrooms. Participants were separated into groups based on sports participation (elite athletes, n = 171, competitive athletes, n = 71; and non-athletes, n = 145). The intensity of the activity (strenuous, moderate, and mild), the level of athleticism (competitive, elite, non-athlete), gender, and sport orientation (win, goal, competitive) were examined. The level of athleticism (elite, competitive, and non-athlete) was found to be positively related to physical competence and appearance self-concept as well as global physical and general self-esteem. Analyses revealed a significant difference between the non-athletes and both the competitive and elite groups (with a difference between the latter two for physical competence only). Sport orientation was found to moderate the relation between athleticism and general self-esteem; non-athletes who had a greater win orientation or lower competitive orientation were also lower in self-esteem. Thus, the fit between the level of competition and self-concept may depend on characteristics of the individual such as her/her sport orientation.
vorige artikel The Role of Youth’s Ratings of the Importance of Socially Supportive Behaviors in the Relationship Between Social Support and Self-Concept
volgende artikel The Role of Friends in Early Adolescents’ Academic Self-competence and Intrinsic Value for Math and English 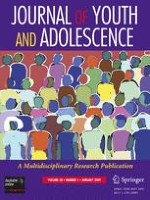 Autonomy, Belongingness, and Engagement in School as Contributors to Adolescent Psychological Well-Being

Individual Characteristics and the Multiple Contexts of Adolescent Bullying: An Ecological Perspective