Given the consistently high viewership of television (TV) by youth, the social, behavioral, developmental, and psychological impact of such viewing has been studied for decades. Yet, little research has focused on the connections between youth, the TV shows to which they are exposed, and the characterizations of leadership presented to them. This study examines the type of leadership behaviors and orientations presented through youth TV shows in the United States across a continuum of viewership age targets. Shows were selected through purposeful sampling from the most popular youth TV shows in the United States, and episodes were chosen based on synopsis, selecting for the greatest possibility of leadership scenarios. Researchers identified three shows for each viewer target age group and five episodes for each TV show, for a total of 75 episodes. The findings include the discovery that show-prescribed viewer target age group positively predicted leadership behavior such as direction-setting—i.e., gathering information, organizing information, sense-making, and forecasting. Additionally, as viewer target age range increased, shows presented with a decrease in communal leadership—characterized as caring, warm, trustworthy, empathetic, helpful, and/or friendly. Such findings suggest that the representations of leadership depicted in popular youth TV shows are transmitting potentially counterproductive messages to future leaders, deprioritizing crucial leadership elements.
vorige artikel Exposure to Television Alcohol Brand Appearances as Predictor of Adolescent Brand Affiliation and Drinking Behaviors
volgende artikel Contextualizing the Well-being of Asexual Youth: Evidence of Differences in Family, Health, and School Outcomes 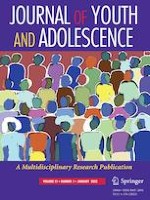 Identity Development and Social-Emotional Disorders During Adolescence and Emerging Adulthood: A Systematic Review and Meta-Analysis