Nonsuicidal self-injury (NSSI) describes deliberate self-destructive behaviors without the intention to die. Little is known about what factors contribute to NSSI especially among youth. The current study tested two conceptual models for how chronic interpersonal stress and rumination may contribute to NSSI engagement across 18 months in a community sample of youth: (1) a mediation pathway based on the Emotional Cascade Model (i.e., stress contributes to rumination and then to subsequent NSSI), and (2) a moderation model based on the cognitive vulnerability-stress framework (i.e., rumination moderates the relation between stress and NSSI). 516 youth aged 7–16 (Mage = 12.0; 56% female; 90% Non-Hispanic or Non-Latinx) reported on ongoing interpersonal stress occurring between T1-T2 (every 6 months from T1 to 12 months) via the Youth Life Stress Interview, rumination via the Children’s Response Styles Questionnaire (at T1 and 18 months later, T2), and NSSI engagement every six months from 18 to 36 months (T2-T3) via the Self-Injurious Thoughts and Behaviors Interview. Interpersonal stress predicted later rumination (b = .43, p < .01), rumination forecasted later NSSI occurrence (OR = 1.06, p < .01), and mediation was supported via a significant indirect effect of interpersonal stress on NSSI through rumination (b = .03, 95% CI = .01, .07). Rumination did not significantly moderate the relation between stress and NSSI. The prospective relation between chronic interpersonal stress and NSSI engagement was partly explained by rumination, aligning with the Emotional Cascade Model’s prediction that rumination contributes to NSSI. Youth may conduct NSSI to interrupt rumination elicited by chronic interpersonal stress.
vorige artikel The Impact of Academic Achievement and Parental Practices on Depressive Symptom Trajectories Among Chinese Adolescents
volgende artikel Unraveling Prospective Reciprocal Effects between Parental Invalidation and Pre-Adolescents’ Borderline Traits: Between- and Within-Family Associations and Differences with Common Psychopathology-Parenting Transactions 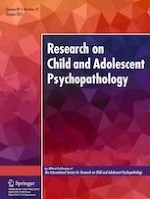 Emotion Regulation as a Mediator in the Relationship Between Cognitive Biases and Depressive Symptoms in Depressed, At-risk and Healthy Children and Adolescents

Theory of Mind as a Mechanism That Accounts for the Continuity or Discontinuity of Behavioral Inhibition: A Developmentally Informed Model of Risk for Social Anxiety