The present investigation examined the main and interactive effects of anxiety sensitivity (AS) and emotion dysregulation in predicting anxiety-relevant cognitive and affective symptoms among a community-based sample of young adults (n = 242, 135 women; M age = 23.0 years, SD = 8.71). Consistent with hypotheses, the interaction between AS and emotion dysregulation significantly predicted worry, catastrophic cognitions about bodily events, and anxious arousal symptoms above and beyond the respective main effects and negative affectivity; though this interactive effect contributed only 1% of unique variance to each of these criterion variables. Specifically, although the overall effect size for this interaction was small, the highest levels of each criterion variable were (marginally) evidenced by individuals reporting co-occurring high levels of AS and high levels of emotion dysregulation. Also as expected, explanatory specificity for cognitive and emotional symptoms of anxiety was evident, as no interactive effect was apparent for anhedonic depressive symptoms. Furthermore, the main effects of AS and emotion dysregulation, entered concurrently, were significantly incrementally predictive of each of the anxiety-relevant criterion variables; and only emotion dysregulation was significantly predictive of depressive symptoms. Findings are discussed in relation to advancing scientific understanding of anxiety vulnerability from an emotional dysregulation framework. 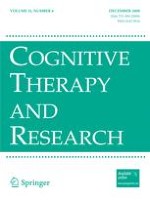 Mindfulness, Depression and Modes of Mind