The interaction of locus of control, self-efficacy, and outcome expectancy in relation to HbA1c in medically underserved individuals with type 2 diabetes | mijn-bsl Skip to main content
TOOLBAR 1 2 3 4
ZOEKEN MENU 1 2 3 4 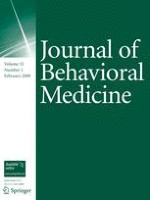 Ethnicity- and socio-economic status-related stresses in context: an integrative review and conceptual model

Disparities in the provision of medical care: an outcome in search of an explanation

Coping with racism: a selective review of the literature and a theoretical and methodological critique