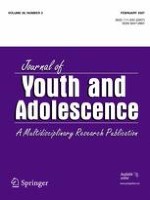 Adolescent Children of Adolescent Mothers: The Impact of Family Functioning on Trajectories of Development

Adolescents' Participation in Service Activities and Its Impact on Academic, Behavioral, and Civic Outcomes

Effects of Student Participation and Teacher Support on Victimization in Israeli Schools: An Examination of Gender, Culture, and School Type