The majority of studies examining mental health outcomes among the offspring of depressed individuals have only examined the influence of mothers. We examined the influence of maternal and paternal depression on rates of offspring depression [major depressive disorder (MDD)], anxiety disorder (generalized anxiety disorder, social phobia, specific phobia, agoraphobia, and panic disorder), and substance use disorder (alcohol abuse and dependence, substance abuse and dependence). Diagnostic interviews conducted with 220 offspring of both high and low risk parents (high risk defined as having a biological parent with MDD) were analyzed using Cox proportional hazards models. We also conducted exploratory analyses examining how maternal and paternal depression influenced age of disorder onset among offspring. For offspring depression and anxiety, the effect of having a father with depression paralleled the effect of having a mother with depression. Maternal MDD resulted in lower levels of offspring functioning when compared to offspring of non-depressed mothers. Maternal MDD also resulted in an earlier age of onset among offspring. Clinical attention to both maternal and paternal depression through family intervention is warranted and prevention efforts would be the most fruitful if offered no later than middle childhood. 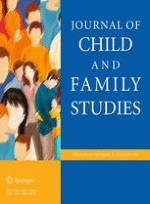 Intensive Parenting: Does it Have the Desired Impact on Child Outcomes?

Extending Knowledge of Parents’ Role in Adolescent Development: The Mediating Effect of Self-esteem