The Impact of Music-Based Rational-Emotive and Cognitive-Behavioral Education on Positive and Negative Emotions: A Preliminary Investigation in Ecological Conditions | mijn-bsl Skip to main content
ZOEKEN MENU 1 2 3 4

Although there is an extensive literature showing that both rational-emotive and cognitive-behavioral interventions (REBT/CBT) and music can alter various emotional responses, little is known about their ability to impact on both positive and negative emotions simultaneously. Thus, the present study aimed to investigate whether classical music combined with REBT/CBT psycho-education on emotions can alter people’s levels of positive and negative emotions. A number of 459 participants (62.7% females; m age = 36.67, SD = 11.754) were recruited for this study from the public attending to a classical music concert. The classical music pieces were selected by a group of experts in order to be conceptualized in relationship with components of the REBT/CBT’s ABC model of emotions (e.g., catastrophyzing, acceptance/meditation) and this conceptualization was also delivered during the concert (i.e., before each corresponding musical part). Emotions were assessed before and after the entire performance for all participants. Results indicated a significant change in emotions between the two assessments (F(11,397) = 59.99, p < .001, partial η2 = .62), revealing significant increases for all the positive emotions and decreases for all the negative emotions that have been evaluated. This is one of the first experimental studies conducted on large-scale in fully ecological settings to confirm that music-based rational-emotive and cognitive-behavioral education might change the intensity of people’s positive and negative emotions simultaneously. These findings are discussed in line with the existing models of music and emotions.
vorige artikel The Use of the Mirror Tracing Persistence Task as a Measure of Distress Tolerance in Generalized Anxiety Disorder 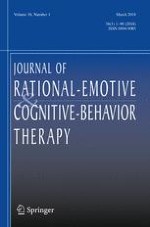