Low vision in old age is prevalent, and due to demographic changes, the prevalence will increase substantially in the future [ 1– 3]. In the Netherlands, the prevalence of low vision among persons 50 years of age and older was estimated 3.3% in 2008 but will increase by 18% in 2020 [ 2]. Low vision is associated with negative outcomes such as limitations in activities of daily living [ 4– 7], physical dysfunctioning [ 8], depressive symptoms [ 5, 6, 9– 13] and lower health-related quality of life [ 7, 14– 18]. However, previous studies yielded mixed results regarding feelings of anxiety [ 9, 11] and social support interactions [ 4, 6, 10, 19].
Far most studies analyzed only associations between severity of vision impairment and daily functioning in (older) persons with vision loss. And although some studies examined the impact of low vision by comparing older adults with and without vision impairment [ 4, 7– 9, 11, 14, 16, 17], only a very few compared older persons with low vision with older persons with other chronic conditions in order to study its relative impact on the aspects of daily functioning [ 7, 17]. Both types of knowledge may help to estimate the impact of low vision on daily functioning in older adults, however. Professionals working at vision rehabilitation services may improve their quality of care as they can take into account such information in their intervention work.
We had two aims for the present study. First, to compare the levels of health-related quality of life (i.e., activities of daily living, symptoms of depression, feelings of anxiety and social support) of older people with vision loss seeking vision rehabilitation services with a reference group of older people from the general population. And second, to compare the levels of health-related quality of life of older people with vision loss with older people with different chronic conditions.

The study group was recruited as part of a randomized controlled trial to evaluate orientation and mobility training by the two main (not-for-profit) organizations for low vision care in the Netherlands: ‘Bartiméus’ and ‘Royal Dutch Visio’ ( http://​www.​visio.​org/​home). Details of the recruitment strategy were published elsewhere [ 20, 21]. The initial study sample consisted of 149 adults ≥55 years of age who lived independently or in a home for older people, applied for low-vision rehabilitation services (either by themselves or referred by other health care professionals) and were screened as potentially qualified for mobility training in the use of an identification cane. The latter was performed during an intake conversation by mobility experts of the rehabilitation centre and implies that the client has sufficient remaining vision to see, for instance, large obstacles but may have difficulty recognizing acquaintances. For reasons of comparison with the reference group (persons ≥57 years of age), we excluded one person of 55 years, resulting in a study group of 148 persons of ≥57 years. Persons with cognitive impairment were excluded in both study samples [ 21, 22].
The Medical Ethical Committee of Maastricht University/Academic Medical Hospital Maastricht granted approval for conducting this study and the research adhered to the tenets of the Helsinki Declaration.

After computing summary scores for the health-related quality of life variables, we compared the mean scores and standard deviations of these variables with reference outcomes of the baseline assessment of the Groningen Longitudinal Aging Study (GLAS [ 22, 27]). GLAS—conducted between 1993 and 2001—is a Dutch population-based prospective follow-up study of determinants of health-related quality of life in persons ≥57 years of age. For the present study, we included baseline data collected with the previously described instruments from 4,792 persons (see [ 22]).
First, we compared the scores of the low-vision study group ( N = 148) with the GLAS reference population ( N = 4,792) and according to three age groups, i.e., 57–74, 75–84 and ≥85 years. Next, we compared the mean scores and standard deviations of the study group with those of eight groups with specific chronic conditions from GLAS: asthma/chronic bronchitis, heart condition, hypertension, diabetes mellitus, back problems, rheumatoid arthritis/other joint complaints, migraine/chronic headache and dermatological disorders [ 22]. Only “active” conditions were included (i.e., conditions for which a physician was consulted or medicines were used in the 12 months prior to the interview [ 22]). Differences were tested with Student’s t-test. Data were analyzed with PASW version 17.0 and GraphPad Prism [ 28].

In this study, we examined the impact of low vision on health-related quality of life among older adults seeking vision rehabilitation services. We found that older persons with vision loss generally reported poorer levels of functioning with respect to ADLs, symptoms of depression and feelings of anxiety as compared to the general older population, as well as compared to older patients with different chronic conditions. In contrast, older persons with vision loss reported more social support in all domains. Particularly levels of support in problem situations were higher among people with low vision compared to the general population. A reasonable explanation could be that low-vision problems and associated physical and mental health problems may provoke the needed social interactions and other kinds of support by particularly this group. Previous studies supported our findings with respect to ADLs and symptoms of depression (see Introduction) but showed inconsistent results with respect to both feelings of anxiety and social support interactions [ 4, 6, 9– 11, 19].
Post hoc analyses showed that, although measured slightly different, low-vision patients with a heart condition ( N = 50), rheumatoid arthritis/back problems/osteoporosis ( N = 43), COPD/asthma/emphysema ( N = 27) or diabetes mellitus ( N = 24) reported higher GARS and HADS scores compared to the patients of the GLAS reference population indicating poorer levels of functioning. However, the differences for diabetes mellitus were not significant ( P > .05) likely due to the limited number of these patients in the study group. The SSL12-I total scores were also higher for these low-vision patient groups although the differences for heart conditions and COPD/asthma/emphysema patients were not significant. This supports our finding that low vision has a negative impact on physical and mental functioning, even irrespective of chronic conditions.
Our study has several limitations. First, although outcomes in the low-vision study group and reference population were measured with the same instruments, differences may exist in characteristics of both samples. However, mean age (77.4 years, SD 8.8 in study group and 77.1 years, SD 8.2 in reference population—not significant) and sex distribution (56.8% women in study group and 56.4% women in reference population—not significant) were similar in both groups. Second, chronic conditions were self-reported. To reduce report bias, only conditions for which a physician was consulted or medicines were used in the 12 months prior to the interview were included in both samples. Finally, the mode of administration of the GARS, HADS and SSL 12-I was slightly different in both settings: in the low-vision sample, all measures were assessed with telephone interviews while in GLAS the GARS was assessed in a face-to-face interview and the HADS and SSL 12-I were assessed with a questionnaire during this interview.
We conclude that vision loss has a negative impact on ADLs, symptoms of depression and feelings of anxiety in older people. However, social support was highest in the low-vision sample. Professionals working at vision rehabilitation services may improve their quality of care as they take such information into account in their intervention work.

We thank the collaborating organizations for low vision care in the Netherlands, i.e., Bartiméus and Royal Dutch Visio, and their clients, orientation and mobility trainers and contact persons, particularly D. M. Brouwer, N. van der Meent, J. van der Velde and P. F. J. Verstraten. The Centre for Data and Information Management of Maastricht University (MEMIC) and B. Franssen and R. Handels are acknowledged for assistance in the data collection. This study was funded by ZonMw—the Netherlands Organization for Health Research and Development, Program In Sight (grant 94305004). 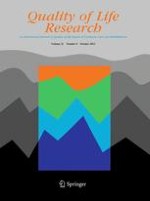 Mental quality of life in chronic fatigue is associated with an accommodative coping style and neuroticism: a path analysis

Implementing patient-reported outcomes assessment in clinical practice: a review of the options and considerations