Idiopathic pulmonary fibrosis (IPF) is a progressive and universally fatal lung disease, characterised by increasing fibrosis of the lung parenchyma. In this study, we aimed to quantify the health state utility values (HSUVs) for Australians with IPF and to identify the factors affecting these HSUVs.

A total of 155 participants provided data for the analysis of HSUVs. For our base case, HSUVs ranged from − 0.57 to 1.00. Mean HSUVs for all participants was 0.65 (95% CI 0.61–0.70). In general, HSUVs decreased with increasing disease severity under all disease severity classification systems. Multivariable linear regression demonstrated a negative association between HSUVs, disease severity and having more than 2 comorbidities.

Our study has shown that EQ-5D-5L has exhibited discriminatory sensitivity for the study population. We have demonstrated that disease severity and having more than two comorbidities was associated with lower HSUVs in Australians with IPF. Our findings support early diagnosis and appropriate evidence-based treatment to slow or prevent IPF progression; and identification and treatment of associated comorbidities to potentially improve health-related quality of life in people with IPF.
vorige artikel Association between knee symptoms, change in knee symptoms over 6–9 years, and SF-6D health state utility among middle-aged Australians
volgende artikel Psychometric assessment of EQ-5D-5L and ReQoL measures in patients with anxiety and depression: construct validity and responsiveness 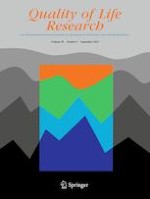 Psychometric assessment of EQ-5D-5L and ReQoL measures in patients with anxiety and depression: construct validity and responsiveness

The association between nonrestorative sleep and health-related quality of life in Chinese adults: a cross-sectional study