Statistical methods for identifying response shift (RS) at the individual level could be of great practical value in interpreting change in PRO data. Guttman errors (GE) may help to identify discrepancies in respondent’s answers to items compared to an expected response pattern and to identify subgroups of patients that are more likely to present response shift. This study explores the benefits of using a GE-based method for RS detection at the subgroup and item levels.

The analysis was performed on the SatisQoL study. The number of GE was determined for each individual at each time of measurement (at baseline T0 and 6 months after discharge M6). Individuals showing discrepancies (with many GE) were suspected to interpret the items differently from the majority of the sample. Patients having a large number of GE at M6 only and not at T0 were assumed to present RS. Patients having a small number of GE at T0 and M6 were assumed to present no RS. The RespOnse Shift ALgorithm in Item response theory (ROSALI) was then applied on the whole sample and on both groups.

Different types of RS (non-uniform recalibration, reprioritization) were more prevalent in the group composed of patients assumed to present RS based on GE. On the opposite, no RS was detected on patients having few GE.

Guttman errors and item response theory models seem to be relevant tools to discriminate individuals affected by RS from the others at the item level. 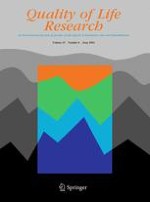 Quality of life among patients after bilateral prophylactic mastectomy: a systematic review of patient-reported outcomes

Validation of a new patient-reported outcome instrument of health-related quality of life specific to patients with alcohol use disorder: the Alcohol Quality of Life Scale (AQoLS)

Validation of the EORTC QLQ-INFO 25 questionnaire in Lebanese cancer patients: Is ignorance a Bliss?

Introduction to special section on response shift at the item level

Health-related quality of life in Parkinson’s: impact of ‘off’ time and stated treatment preferences

Quality of life in patients with chronic venous disease in Turkey: influence of different treatment modalities at 6-month follow-up