Recent findings in psychological research have begun to illuminate cognitive and neural mechanisms of imagination and mental imagery, and have highlighted its essential role for a number of important outcomes, including outcomes relevant for the study of psychopathology and psychotherapy. Scientific study of imagination, however, has been constrained by the virtue of being framed mainly as an ability for mental imagery. Here we propose that imagination is a widespread phenomenon that we all engage in, and which affects a wide range of important outcomes beyond more commonly studied constructs like creativity. Thus, the Four-Factor Imagination Scale (FFIS) focuses on features of the imaginative process, and measures imagination in terms of individual differences in those features, including frequency, complexity, emotional valence, and directedness of imagination. Study 1 consisted of construct elicitation and generation of a large pool of candidate survey items. Study 2 (N = 378) conducted exploratory quantitative analysis on the preliminary pool of candidate items in a larger sample, revealing four distinct factors of the designed items. Study 3 (N = 10,410) confirmed the structure of the preliminary items, and reported internal consistency and unidimensionality, as well as convergent and discriminant validity of the resultant scales. The FFIS confirms that imagination is multi-faceted in nature, and is better approached as a constellation of more narrowly measurable constructs.
vorige artikel Investigating the mediating effect of working memory on intentional forgetting in dysphoria
volgende artikel Outgroup faces hamper word recognition 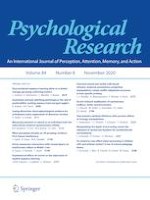 Measuring attention to reward as an individual trait: the value-driven attention questionnaire (VDAQ)