We investigated the psychometric properties of a Chinese version of Five Facet Mindfulness Questionnaire (FFMQ) in a non-clinical student sample. The Chinese FFMQ demonstrated acceptable internal consistency and the test-retest reliability. Confirmatory factor analysis provided support for the five-factor model. Four of these facets (describing, acting with awareness, non-judging and non-reacting) were shown to have incremental validity in the prediction of depression and anxiety. Our findings suggest that the Chinese version of the FFMQ has acceptable psychometric properties and is a valid instrument for the assessment of mindfulness. 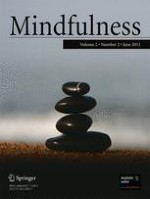