This study aimed to estimate Korean preference weights for EQ-5D-5L based on values elicited from Korean population by applying the EuroQol Valuation Technology (EQ-VT) program and the standard protocol by the EuroQol Group.

The multistage quota sampling method was used to recruit 1085 subjects from the general population in Korea. Each respondent valuated 10 health states using the composite time trade-off (cTTO) and 7 health states using discrete choice experiment. The EQ-VT program was developed by the EuroQol Group and translated into Korean with the Korean research team. Computer-assisted, face-to-face interviews were conducted. A range of predictive models were explored using cTTO. The most appropriate model was determined after assessing goodness of fit, logical consistency, and parsimony.

Of 3206 contacted, 1085 subjects completed interviews (33.8 %) and 1080 were used for modeling. A model with dummy variables for each level of severity and dimension and a term that picked up whether any dimension in the state was at level 4 or 5 was selected as the best predictive model. All coefficients of the final model were statistically significant and logically consistent. In addition, it was parsimonious. This model had mean absolute error of 0.027, and the absolute error for all 86 health states was below 0.1.

The final model built in this study appears to predict the utilities of the states which were valuated directly. This model could be used to interpolate quality weights for all EQ-5D-5L health states.
vorige artikel Quality of life in Iranian patients with bipolar disorder: a psychometric study of the Persian Brief Quality of Life in Bipolar Disorder (QoL.BD)
volgende artikel The EORTC QLQ-CR29 quality of life questionnaire for colorectal cancer: validation of the Dutch version 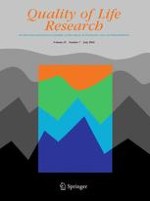 Satisfaction with life in adults with Marfan syndrome (MFS): associations with health-related consequences of MFS, pain, fatigue, and demographic factors