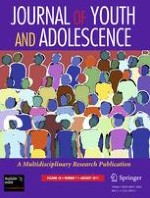 The Journal of Youth and Adolescence at 40

Is Sensation Seeking a Stable Trait or Does it Change Over Time?

M. Gigi Durham: The Lolita Effect: The Media Sexualization of Young Girls and Five Keys to Fixing It